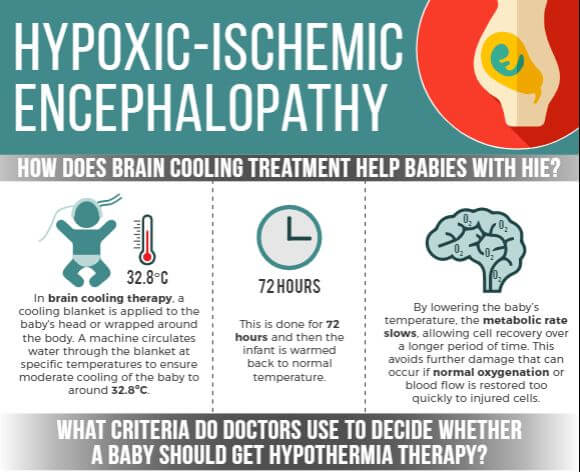 Babies are cooled immediately after birth if they have hypoxic ischemic encephalopathy (HIE). HIE is a condition that occurs when an infant’s brain is deprived of oxygen. It is a significant cause of death and long-term disability in infants. The severity of the infant’s HIE determines his or her risk of cognitive impairment and disability.

Oxygen deprivation resulting in HIE typically occurs in the perinatal period – that is, just before, during or shortly after delivery. Potential causes of oxygen deprivation leading to HIE include problems with the umbilical cord, placental abruption, or uterine rupture.

Cooling treatment – known as neonatal therapeutic hypothermia – is a relatively new option for treating HIE. It involves reducing the infant’s total body temperature by 2-3 degrees Celsius, resulting in modest hypothermia. The treatment works by reducing the brain’s use of energy, which slows disease progression and reduces the chances of the infant suffering from severe brain damage. Research suggests that therapeutic hypothermia is safe and provides long-term protection for the brain.

To meet the criteria for this treatment, infants must be at least 36 weeks’ gestation. The infant must be less than 6 hours old to start cooling treatment. After 6 hours of age, cooling does not provide the same level of protection. Infants may not be eligible for the treatment if they have certain congenital abnormalities or if they have a very low birth weight. Cooling is only used in very specific situations – the infant must have severe acidosis demonstrated by a low umbilical cord pH, abnormal blood gases or base deficit, and a complicated delivery and low Apgar scores, or have needed at least 10 minutes of help breathing. The infant must also show evidence of moderate to severe encephalopathy, demonstrated by a combination of signs and symptoms such as seizures, lethargy or coma, decreased or no activity, abnormal posture, decreased muscle tone, weak or absent reflexes and abnormal heart rate, pupils or breathing.

Because it can be difficult to assess some infants’ injuries, consultation with a neonatologist is sometimes necessary.

There are two main methods of cooling the infant – whole body cooling and selective head cooling. The type of cooling used depends on the hospital, but both methods have been shown to be safe and effective in bringing core body temperature down to therapeutic levels. Rewarming begins after 72 hours of cooling, and serial monitoring of the infant’s core temperature is important to prevent overheating.

Cerebral palsy or other severe disability occurs in more than 30% of newborns affected by HIE and is most common in those who suffer severe encephalopathy. Because of the broad spectrum of developmental impairments found in infants who suffer from HIE, following affected infants throughout their development is important. Specialists such as neonatologists, physiotherapists, neurologists, occupational therapists, pediatricians, ophthalmologists, and audiologists working together to assess long-term outcomes is an important component of care for infants who have received therapeutic hypothermia.

Cerebral palsy may or may not be due to negligence on the part of the medical team attending the delivery. Our cerebral palsy attorney at Pacific Medical Law has a lengthy and established record of determining the cause of the infant’s cerebral palsy and, in appropriate cases, obtaining judgments and settlements on the child’s behalf.

HIE is a condition that can have severe consequences. Over the past decades, therapeutic hypothermia has emerged as an effective treatment option and has been shown to decrease severe long-term disability and death in infants with moderate to severe HIE. Further research is still needed to increase understanding of the progression of HIE, identify additional treatments, and develop more precise ways of predicting long-term outcomes. The use of therapeutic hypothermia can be expected to be more widely used as the process is perfected, with more infants benefiting from its use.

If your child received therapeutic hypothermia treatment and you have unanswered questions about what caused your baby’s HIE, contact our pediatric injury lawyers in Vancouver. We would be happy to discuss your concerns and outline the options available for your child.

Here is an infographic which shows the cooling process: