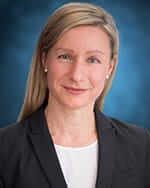 Susanne Raab is a lawyer at Pacific Medical Law, and an advocate for people living with disabilities. She has been selected for inclusion by her peers in Best Lawyers in Canada in the area of Medical Negligence and is recognized as a leading practitioner in the Canadian Legal Lexpert® Directory in medical malpractice. Susanne is also a Fellow of the Litigation Counsel of America, an honorary trial lawyer society whose membership is limited to less than one-half of one percent of North American lawyers, judges and scholars.

Susanne’s practice focuses on representing individuals and families who have suffered injuries as a result of medical malpractice, with a focus on birth injuries and catastrophic brain and spinal cord injuries. Prior to joining Pacific Medical Law, Susanne spent much of her legal career representing physicians in complex medical malpractice actions.

Susanne is also an adjunct professor at the UBC Allard School of Law where she teaches the medical negligence course to 2nd and 3rd year law students.