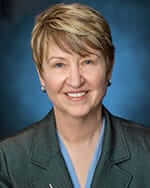 Brenda Osmond is a lawyer at Pacific Medical Law in Vancouver, BC. She brings to her practice her unique insights into the health care system, gained through her work as a pharmacist for over 20 years.

Brenda acts only for injured patients and their families, exclusively in the area of medical malpractice. Over the years she has advocated for the interests of many clients with catastrophic injuries. She has been instrumental in settling cases, and has also been part of the team taking cases forward to trial when necessary.

Brenda obtained her law degree from UBC and was called to the bar in 2010. Brenda has a doctoral degree in clinical pharmacy and was a pharmacist before she became a lawyer. As a pharmacist, Brenda had a distinguished career advocating for the interests of patients, both for individual patients and through her work to improve access to health care services across the province.

For the last 10 years of her pharmacy career she was Deputy Registrar of the College of Pharmacists of BC. In that role she assisted in developing the standards for safe pharmacy practice and investigated complaints about the practice of pharmacy. She was also involved in efforts to improve the delivery of healthcare in BC through the implementation of computerized health records. Throughout her career Brenda has been a speaker at professional development conferences and a frequent contributor to professional publications. She is an adjunct Professor at the UBC Allard School of Law, and a guest lecturer at UBC, in the area of professional responsibility and professional negligence for allied health professionals.